We would like to take this opportunity to invite you to participate in our fourth annual Niagara Falls Elvis Festival. Licensed by Elvis Presley Enterprises, we are excited to be a preliminary competition for the Ultimate Elvis Tribute Artist Contest® in Memphis in 2022.

Register For This Contest

Are you ready to be crowned King of the

In 2007, Elvis Presley Enterprises, Inc. announced an inaugural Elvis tribute artist contest event that was a search for the "best representation of the legacy of Elvis Presley." Twenty-four of the best ETAs from around the world, who had each won a preliminary round of the competition, traveled to Memphis during Elvis Week 2007 to compete in the Ultimate Elvis Tribute Artist Contest.

In response to the excitement generated by the first contest, Elvis Presley Enterprises has held the contest each year since, with winners of preliminary contests traveling to Memphis each August to compete for the title.

For 2022, we will be accepting up to 15 Professional competitors. All competitors will compete in two rounds of two songs on Saturday (morning and afternoon), performing with tracks.


Judging will be cumulative through the two preliminary rounds AND the semi final round. The overall winner will be determined by the performance in the final Round. 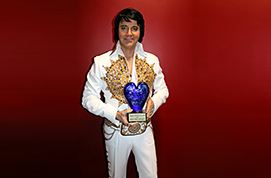 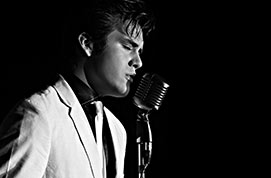 Bruno Nesci has been performing as Elvis since he was 8 years old. Since then, he's worked diligently to produce his professional concert and bring it to the highest level. Nesci has the looks, moves and voice which makes him one of the best Elvis performers in the business. 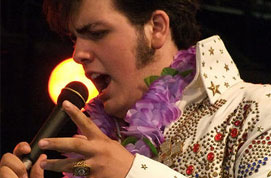